Since 2009, Priya has rocked the show with her mastery of the 80s and 90s Era of Bollywood in different shows. After taking a break to enjoy her second baby she is back to co-host afternoon Drive Time Dhamaal with Sunil on WED and FRI. Born and raised in Houston, Priya was a teenage fan of Masala Radio, faxing in requests for her parents anniversaries since 1993.  She studied dance at the age of 4, and in her young years developed a passion for dance from wathicng her favorites Meenakshi Sheshadri in Hero, and of course Sridevi and the imitable Madhuri Dixit.  Even before she joined as a Radio Jockey, Priya was a leading choreographer for Masala Cruises since 2003, performing on cruises from both the US and Europe.  Ten years later in 2013 she started her own dance company, Ek Do Teen, married a year later, and now she has a happy family of four.

What is a Chel Chabilo?  Its hard to describe to anyone who isn't Gujarati.  A whimsically happy-go-lucky young person who loves everything Gujarati.  This show highlights all that is Gujarati, from the vibrant music to the distinct food, culture & traditions from one of the most productive states in India and seemingly a majority within the Indian population in Houston.   From the treasury of classic Gujarati movies to folklore, to modern day garba-raas music, enjoy the sounds of Gujarat hosted by lead Ina and Dilip.  Some of the popular singers include Pranlal Vyas, Praful Dave, Hemu Gadhvi, Diwaliben Bhil, Damiyanti Bardai and Aishwarya Majumdar.  Key music Directors are Avinash Vyas, Dilip Dhodkiya and Gaurang Vyas.  The origin of the Masala Radio motto "Halo Re Halo" originates from Gujarati, and roughly translates to "Come and enjoy!" 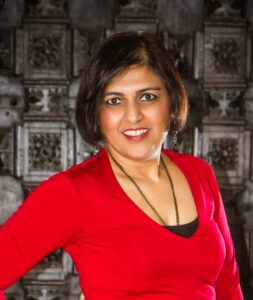 Since 1994, Preanka has been keeping fans in touch with “what’s buzzin’ in Bollywood.”  Music, humor and food are just some of the things that get her (aka Pre~ aka PreU~) excited… well, not quite in that order!  Born in Mumbai, India, as Arti Trilokekar, she got married straight from the womb (ok, not really), and transformed into Preanka […]