Since 1994, Preanka has been keeping fans in touch with “what’s buzzin’ in Bollywood.”  Music, humor and food are just some of the things that get her (aka Pre~ aka PreU~) excited… well, not quite in that order!  Born in Mumbai, India, as Arti Trilokekar, she got married straight from the womb (ok, not really), and transformed into Preanka Desai.  She was probably born with a totally filmi and foodie spoon in her mouth explaining her love for food and singing?!  When Masala Radio’s founder Sunil T was looking for a co-host radio jockey in 1994, just year after they’d started, she put her name in the hat and the next thing she knew, she was invited to talk at Fiesta’s then brand-new location.  It was clear this was her calling… it seemed natural.  Ever since then, she have hosted most every type of show as a radio jockey and interviewed many famous personalities like A. R. Rahman, Anupam Kher, etc. (yes, name-dropping…!).  The radio shows she hosted featured everything from today’s rocking hits to black-and-white classics to religious/devotional to shows highlighting diverse cultures, mainly in the Bollywood genre.  Her famous tagline, “That’s what’s buzzin’ Bollywood… I’ll have more in just a few…!” became a catchy slogan as she shared newsy happenings, providing her own unique perspective.  In addition to radio jockeying, she has also emceed several events showcasing prominent local and international artists.  And then there are the Masala Cruises where she not only managed the crazy Masala crew, but also hosted events.  A self-appointed influencer, providing creative content, managing a blog, reviewing restaurants and places-to-visit, she’s also planning on doing a syndicated show!  Her innate sense of humor and quick wit bring laughter and smiles to everyone. 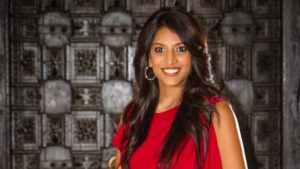