Since 2010, Rinku has been managing sales with her deep commitment to excellence paired with a fun-loving, approachable, and very positive nature.  Rinku manages the Masala behind the scenes team and has earned the admiration and respect of both clients and crew members.  Beyond the serious side, here are some fun facts about Rinku: She first & foremost LOOOOOOOOVES Shahrukh Khan and has watched all his movies.  She LOVES Bollywood, daily uses at least one famous filmi dialogue like “Bade Bade desho mein aaisi choti choti bathey hoti reheti hai Senorita”.  While Bollywood films are her stress-buster, not a day goes by without listening to Bollywood music., especially her favorite 90s, dance songs, and to workout with all the Dhinchak songs!  SHe admits to being a true Bong (person of Bengali origin), and her weakness is for Bengali sarees and costume jewelry, even to the point of being called “Pagol” in Bengali (Crazy)..  Fiercely loyal to Masala Radio and her friends, and family, she tells everyone “Hum duniye pe nehi logo ke dil mein raaj karte hai.”   She is loving mother of two boys, and married to her Opposties-attract husband Deep.  As an advertiser, rest assured you will be taken care of by one of the best in her field! 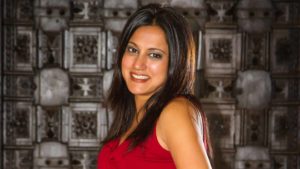 Since 1993, Sandhya has steered the creation and executive management of Masala Radio.  She created the original name, Music Masala, which years ago was modernized to Masala Radio, with the parallel creation of Masala Cruises and Masala Entertainment.  Along with life partner Sunil, she has created the structure for growth from a two hour radio […]

SINCE FEB 2021, Shivangi has created a stir on Masala airways with her saucy but trendy Bollywood Buzz.  Its useless to stop her on the street and ask her “did you know…?”  If its about Bollywood, about India, or even about Houston, she already knows it – the trends feed is not on her phone […]